It’s 9:30 in the morning and I’m stood in a queue of around 40 people waiting to get into Bespoked Bristol at Brunels old station.
I have never attended Bespoked Bristol before so had high hopes for it, and was certainly looking forward to seeing some fresh and new ideas from some of the brightest engineers in the UK.

There were some amazing designs of bikes at Bespoked Bristol one of my favourites was a company called Saffron which had on show a couple of bikes where the seat tube was made out what looked liked plastic tubing. I could be completely wrong as too what exactly the material used was, but I never got a chance to speak the guys on the stand to find out exactly what it was made from.

The bike pictured below which featured this neat design was a 29er, which is also the first time I’ve had a chance to look at one up close. Whilst looking around I overheard a few people at Bespoked Bristol ask Matt from Saffron did “he think 29ers would take off”? Which was in the back of my mind as well but wasn’t brave enough to ask him. 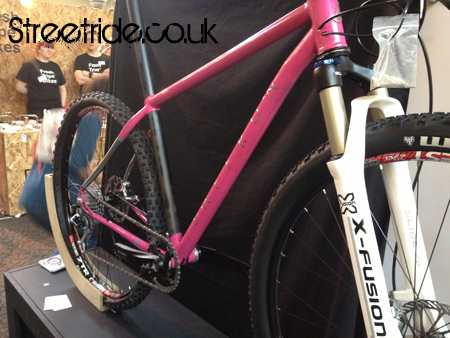 My main purpose of the trip was to meet the guys from BTR bikes. I have been following the progress closely as I think the product they have produced, however niche is a fantastic product. The guys where super friendly and talked to me for some time about their frame design. I was always slightly sceptical about how the frame would look with a huge set of forks on the front, but when you see the BTR in the flesh it completely make sense. 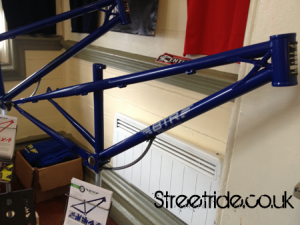 BTR will hopefully go from strength to strength after the recent appearance on the front page of Pink Bike and I wish them the best for the future.

Thanks again to the guys from BTR who answered all my questions and gave me a few stickers to.

Big shout out to the Stu from Oyster bikes who took the time to talk to me about his beast of a bike. If you’ve been riding long enough you may remember a bike company called Brooklyn, where Stu has taken some of his inspiration from and has created a awesome looking full sus. He has also removed the rear mech and fitted a gear hub, which was a nice feature. 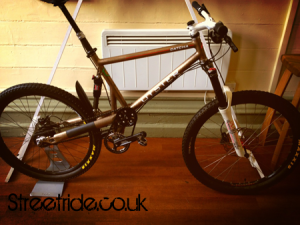 The final amazing company I spoke to was a company called Loop Wheels who are basically trying to reinvent the wheel, by adding in carbon fibre strips within the wheel itself and when ridden they act as suspension. To see for yourself check out the picture below. 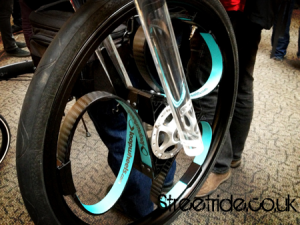 This is a neat idea and as far as I’m aware they are only running them on 20″ wheels at the moment.
They didn’t say how much they were going to cost when I spoke to them, but I can imagine them having quite a hefty price tag! 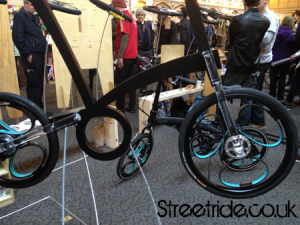 Speaking to a couple of people how attended last year’s Bespoked Bristol said that there were a lot more this year than last, so hopefully next year we may see some more mountain bike manufactures. 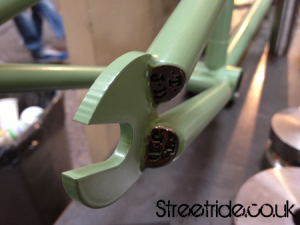 A couple of companies at Bespoked Bristol also were showing off wooden and bamboo bikes and frames. I stood there and listed to the guys talk about their products, and it is impressive but I’m really not a fan. The wooden bikes looked like something you would make in a “Design and Tech” class at school. Big, clumpy and really unattractive.
The same goes for the bamboo bikes, yes I know its “green” and an awful lot of skill goes into making a bike from bamboo, but in my opinion it’s not the way forward. Don’t get me wrong, the processes and skills needed to create something out bamboo or wood for that matter are huge, but it just feels to me that using that sort of material is taking a step back, rather than a step forward.

Overall the show was pretty good. My only real disappointment was that the demonstrations and talks on frame building were very quiet and you couldn’t see anything they were doing. Fine if your at the front, but not when it’s five or six people deep. Sound was terrible too but hey, I’ve had my grumble.

I will definitely be going to Bespoked Bristol next year! To be in a room with some much talent and seeing some very exciting designs and concepts in an industry I love is amazing. I would highly recommend going if you haven’t attended a Bespoked Bristol before and it has given me the inspiration to build my own bike frame. (Not out of bamboo or wood though).