Danny MacAskill has been rather busy recently as he has just released his first signature model trainer shoe from flat pedal grip masters FiveTen.

Danny Mac’s signature shoe has been designed around the FiveTens existing shoe the Freerider. The Danny MacAskill shoes has a beefed up toe box and heel area requested by Danny himself. As we are sure you know if you have seen some of Dannys videos he does bail quite hard so having that extra protection on the feet is great news for him.

The shoes were featured we believe in the channel 4 video he did for concrete circus so we are excited about finding out a little more about them.

Pictures of the shoes can be seen below: 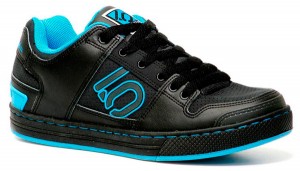 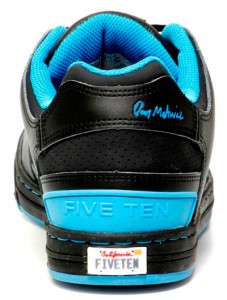 “I really wanted my shoe to have the great feel and grip of the Freerider but wanted to improve the durability in areas that get the most wear from riding my trials bike, like the toes and heels,” said MacAskill. “Plus, I wanted better protection and cushioning around the heel area as I tend to bruise my heels a lot riding street trials. I also wanted the shoes to be fairly stealthy with a bit of detail as I’m not a bright shoe kind of guy.”

The Danny MacAskill Signature shoes will be officially launched at this week’s Eurobike show and will be part of FiveTen’s 2012 shoe range. We cant wait to see them in the flesh!