Hi Euan, could you quickly introduce yourself to the readers of Street Ride?

My name is Euan Beaden, I’m 16 years of age and ride 24” street trials. I was born in the south of England in Portsmouth, and live in a small town called Waterlooville.

How long have you been riding for?

Have you always rode street trials?

My parents got me my first BMX when I was 12 and I found it hard to do any tricks on, which is when I found out about trials bikes near the age of 13. I then bought a Onza T-Bird trials bike off of a mate, and never turned back.

What is your current bike set up?

I am currently riding an Inspired Element complete bike with a few modifications:

You are currently out injured. How are you feeling and how did you injure yourself?

When filming for my recently released video ‘Just for Fun‘, I bailed out of a trick and landed half on, half off a kerb. You can imagine what happened.

I rode home thinking nothing of it…Found out later on at the hospital that I had broken my ankle and torn all the ligaments as well! Obviously it sucked not getting all the clips for my video, but I am happy with the way it’s turned out anyway.
There’s no real reason to feel down about it, as ‘Shit Happens’ and hopefully I’ll be riding again very soon! 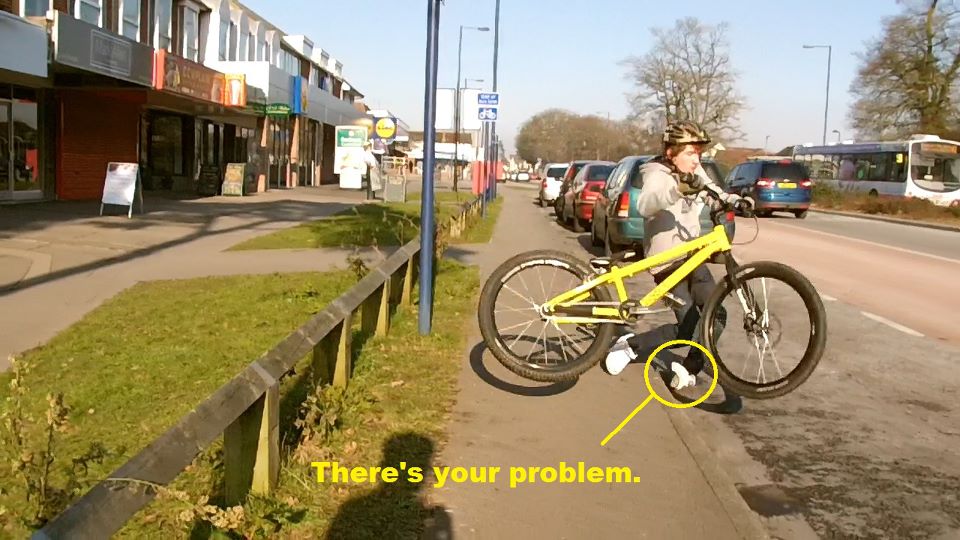 How long until you are able to ride again?

I’m out of my cast in 3 weeks, but I still have a month after that of building up the ligaments to ride properly again. It sucks!

Do you have any support/ sponsorship from any bike manufacturers or other companies at the moment?

I am lucky to be sponsored by Inspired Bicycles and Heatsink Bikes.
Inspired have helped me out so much with my bike and components and have been a real boost for my riding. Check out their full range of bikes here.

Heatsink Bikes have been there from the beginning really, sponsoring me when I rode a 20” Onza Ice bike right up to the present day; supplying me with the best brake pads out there! Recommend them any day!

You are one of those riders who are quickly making a name for themselves. What are your plans for 2012?

My main aim for 2012 is to heal up properly and get back on my bike. I want to carry on riding and pushing my riding further and making more videos. I hope to attend RadFest Trials Festival this year and to ride new places. Basically just be able to ride everyday and have fun with friends!

You are a tech rider, with quite a large box of tricks at your disposal. Before your injury, were you trying to master any move in particular?

I love tech moves a lot, mostly the way they can flow into one another and the feel during them.
I have recently learn how to Decade or ‘Boomerang’ on flat and have been messing around with a few combo’s for that. There were also a few moves that I couldn’t film due to injury such as a Triple Foot-Jam Tail whip which I have managed to land.

If you could ride anywhere in the world, where would it be?

Every time I watch videos I can’t help but want to ride some of the spots in America. The riding spots there are amazing and would be great to go on a road trip with some mates there.

Here in the UK, I love riding Bristol for the great spots and catching up with many friends. Anywhere new is always fun as I live in an area of low riding spots!

Who are you inspired by?

My main inspiration, which shows in my riding, is Danny MacAskill. He’s been a huge influence for me since his video in 2009 and ever since. He’s an awesome guy and funny. Others include Ali C, who is a big inspiration, as well Chris Akrigg.

What are you doing when you are not riding?

When I’m not riding due to college, rain or injury I like to go out somewhere, either with my girlfriend or with mates, because I’m not one to sit around playing video games all day indoors!
I can also be caught playing my piano at home, or cutting lawns in my spare time.

I like to think of new lines to try when riding next, and just constantly think about riding!

What would you be doing if you didn’t ride a bike?

To be honest, I don’t know what I’d be doing if I wasn’t on two wheels! All of what my life has become at the moment is because of my riding somehow.

If bikes weren’t an option in life, I would probably be a science nerd as I’m quite interested in Maths and Physics! There, I said it!!

I am most proud of winning Best trick in the first Red Bull Street Light Session in Bristol in 2011, where I won £500! I was riding with all of my inspirations and the best street riders in the world including Ali C and Danny MacAskill with Chris Akrigg as a judge; it was just the perfect riding experience! 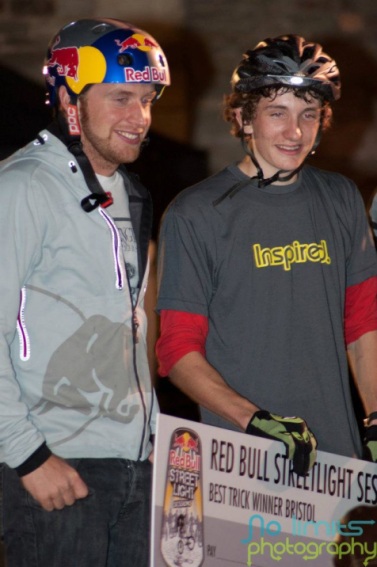 Is there anyone you would like to give a shout out to?

I would like to say a big thanks to Inspired Bicycles and Heatsink Bikes for supporting my riding and giving me opportunities I otherwise wouldn’t have had!

Thanks to all of the people I regularly ride with who are always there for me and help with my riding.
Lastly, I want to thank Matt Spencer for being the world’s best camera man and best mate in the world!

Editor: Thanks again to Euan for taking the time to talk to us, and we wish him a speed recovery! His latest Video ‘Just For Fun’ is below if you have not seen it yet.