Here at Street Ride we had the pleasure on interviewing Jonny Jones, a very talented MTB street filmaker who has made some brilliant short films over the years. Enjoy

Hey Jonny! Would you like to start by introducing yourself to the readers of Street ride?

Hi, I’m Jonny Jones, 26 years old from Surrey.  I basically make videos of Trials riding… and cars!  I’ve been doing this since about 2004.  I also ride, I’ve got an Ashton/DB Effect 24”.  Cheap and cheerful but its a lot of fun!

I’d just like to try and make more videos of Trials riding in general – mostly street to be honest.  Also I want to cover more of the British Drift Championship next year – a couple of mates compete in it.

What kind of work are you doing right now?

I’ve spent the entire summer filming cars and trackdays.  It was an attempt at trying to start some kind of business.  But in all honesty its been far too stressful and not much fun!  So I can’t see it lasting much longer!  I had more fun doing it

in my spare time for friends etc!

What is the hardest part of film making?

Probably finding the music you’re going to edit to.  It has to fit the mood/atmosphere/feel of the day – no matter what the subject matter is. 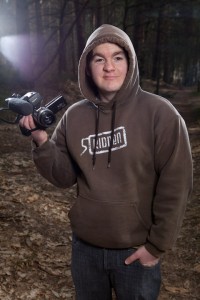 What films or short videos are you most proud of?

I made a video called TM2 a few years ago – when I ran trialmedia.co.uk – the domain name has been bought by some kind of spam company – joy!
It covered pretty much an entire year’s worth of street riding!  I spent more time editing it than I did working on University assignments!  I also made a short promo for the Lotus Evora – that was LOTS of fun!

Who do you most enjoy filming and working with?

Anybody really!  I’ve had long standing relationships with riders like John Shrewsbury, Adam Bessell, Nick Goddard and all the other well-known names on the Trials scene.  If people are out riding and having a good time, anybody is good to film!  Car wise I like filming my mate Luke’s 471BHP Mk3 Fiesta RS Turbo.  He takes it all over the place!  Mad car, nice bloke!  I also love filming drifting when I can!  Lots of tyre smoke, loud exhausts, V8 engines are a favourite and lots of sideways action!

What equipment do you use?

At the moment its all DSLR.  I use a Canon 7D with a variety of lenses, but mainly a Sigma 10-20mm and a Super Takumar 50mm (vintage lens with a Canon EOS adaptor).  I’ve got a Rode Video Mic for slightly better sound, Libec TH950 DV tripod – fairly budget but nice and smooth, a Glidecam 4000 Pro, Glidetrack and a brilliant Hague K14 crane!  As well as a handful of GoPro HD cameras.  I edit using Final Cut Pro.  I’d like to get another actual camcorder though – DSLR’s have their limits!  I like small cameras with big impacts so I’m looking to get a JVC GY-HM150 at some point!  Look it up, small camera, full HD, great images!

Is there any advice you would give to any up and coming film makers?

Get out there and shoot.  It doesn’t matter what camera(s) you have, its all about the work you’re making.  Get on blogs and forums – you’ll learn loads.  I learnt bugger all at University, so never say to yourself “I HAVE to go to Uni”… you don’t!  Work experience will give you a real-world insight into everything.  If you’re not sure what field you want to go into – shooting, directing, post production etc – try it all and see if you like any of it.  I’ve found there are a lot of ego’s in the video industry – but there are also a lot of legends who are usually willing to help you get your foot in the door.  If you find you don’t like any of it, keep filming as a hobby and look at a different industry.

Who is your inspiration, and who do you look up to in the short film world?

At the moment its a guy called Stephen Brooks – he makes simply stunning drifting/car event videos.  I’ve had the pleasure of helping him film at Silverstone recently – REALLY nice guy and we had a laugh!  I still struggle to make anything nearly as good as his stuff haha!  But his style of film making is very different.  Also, DSLR wise, its always going to be Philip Bloom and Tom Lowe from Timescapes.  Philip is basically the DSLR guru and Tom is the timelapse king.  Also, Tom Guilmette is a DOP based in Boston – his blog is fantastic, very thorough with so much information!  He also rides Downhill!  All of these people are worth looking at – they all have websites/blogs.

I guess my website – www.jonnyjones.co.uk – it needs updating more often but some of my work is on there.  Also a big thanks to all the riders who have let me film them since back in 2004 – long may it continue!