Hi Matti, could you start be introducing yourself to the readers of Street Ride.

My name is Matti Hemmings a Pro Flatland BMXer and organiser of the UK Flatland Championships. I’m currently promoting the sport in and around the UK and I have become very well known and respected not just in the BMX flatland Community but in the commercial sector as well. I strive in building awareness of the sport and its growing popularity throughout the UK, which allows me to demonstrate my passion and inspire people of all ages to pick up a BMX.

For some readers who may be unfamiliar with Flatland BMX how would you best describe it?

Flatland BMX is a unique and stylish form of BMX riding. It is performed on a flat surface and is a combination physical spins, balances and tricks. The technical moves are linked with a series of positions were the rider travels around the space and the bike itself. 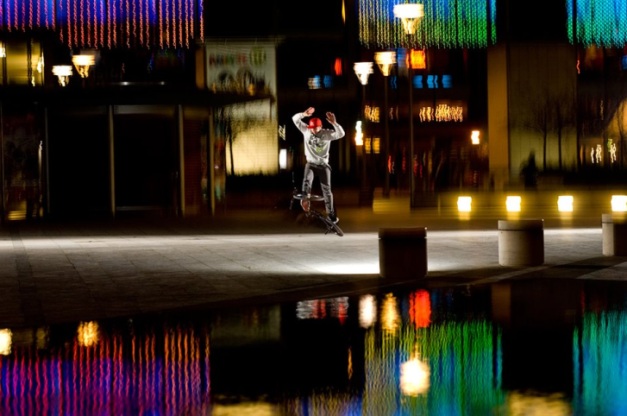 How long have you been riding for?

I’ve been riding for 7 years now.

Flatland BMX involves an incredible amount of skill. How often do you practice your moves?

I try to practice as much as possible when I have free time and weather is nice.

Injuries when practicing must be common, what is the worst injury you’ve sustained?

My worst injury sustained would have to be pulling a muscle in my back learning a trick.

You organised the UK Flatland Championships in 2011, how did it go and will it be back for 2012?

In October 2011 I organised and hosted the UK Flatland Championships in Newport, Wales.

The event itself was the first of its kind in Wales and gave professional and amateur flatlanders the chance to meet, ride and compete for prizes that had kindly been donated by Eastpak UK, Dephect clothing, Eccycles, Crucial BMX shop, Infinitypro, Onersign. This meant that every rider who attended went away with something. Along with prizes, food and drinks was also given out as my ambition for the day was to provide riders with a day to celebrate the sport and have fun, whilst providing a chance to raise the profile of the sport amongst audiences in Wales.

The UK Flatland Championships was included in the Newport Riverfront Festival. This provided the event with a great atmosphere including live music, circus and dance alongside the competition.

With the hit success of the UK Flatland Championships 2011, I’m going to try and organise UK Flatland Championships later this year depending on my free time as this year. I will be taking part in the Olympic torch relay that will run over 70days. That is within 10miles of 95% of the population, I also have other events happening after this tour so finding the time to organise this years contest will be tuff.

Flatland BMX is quite a niche sport in itself, but it is becoming more and more popular. Where do you see the sport of Flatland BMX being in 5 years time from your perspective?

I’d like to let the sport decide, where it wants to be in 5years. But it’s getting its own coverage and more people are talking about it along side other sports. You also put on workshops to groups of people of all ages. What are peoples general reactions when seeing you do your stuff for the first time?

Yeah, I have a set out workshop that most ages can take part in that find it exciting to try tricks that they also can take away with them. People’s reactions are always different by all end up impressed and excited about what they have just seen.

What advice would you give to anyone wanting to give Flatland BMX a go?

My advice to anyone wanting to give Flatland ago would have to be stay positive you cant learn every trick over night anything is possible if you stay positive, I’m always happy to give advice drop me a message over twitter @mattihemmings.

What is the best thing you have achieved?

Organising the UK Flatland Championships over a phone as I was away on tour without Wi-Fi.

What are your plans for the future?

My plans for the future are to promote Flatland BMX, to keep on doing my thing and organising 2012 UK Flatland Championships making it bigger and better.

Finally Matti is there anyone you would like to thank?

I would like to thank Drift Innovation, Infinitypro, EastpakUk, Dephect, Odessa footwear and everyone’s support along the way.

Editor: A massive thank you to Matti for taking the time to answer some of our questions, and from everyone here at Street Ride we would like to wish him the very best for the future.
You can keep up to date with Matti via his website and on Twitter @mattihemmings