Sneak Peek Of The 24UK From Heatsink Bikes

It’s been a long time coming but at the start of this week we finally saw some sneak pictures of what the new 24UK street trials bike could look like. Today we have seen a full engineering drawing of the new 24UK from HeatsinkBikes design published on their Facebook page. 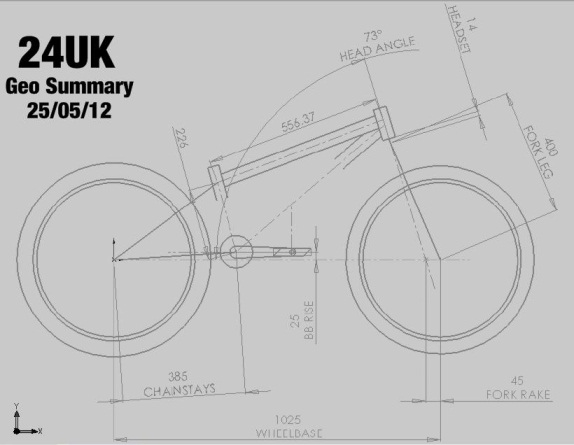 HeatsinkBikes commented on the photo saying;

“This is the starting Geo for the new 24UK, ready to be developed to suit the majority of people. The vision is for it to have the classic look of a Street Trials bike.

The seat-tube is to be a little shorter than general Street bikes, but of the length that it is just long enough so the seat stays and top tube doesn’t form one continuous straight line. It’s only a matter of cm between these 2 states, but the straight line breaks the classic look in my opinion.

By looking like a classic street bike with Trials friendly tweaks not immediately noticeable to the average bystander, the moves that will then be pulled on it will be all the more impressive!

Seatless crazy low stand over bikes look too specialized which can diminish the impressiveness of moves. I think the future of Trials based street riding is about connecting with the public, not alienating them as done in the past.

There’s a certain breakthrough rider who has already proved this theory! Of course with a superlight pivotal seat, the frame would be very competitive in a Trials comp situation too, and be the coolest bike involved”.

We are big fans of the 24UK and actually owned one for a number of years. We look forward to seeing the finished product but from what we can see from the engineering spec drawing it’s going to look fantastic.