We are so pleased to be able share a recent interview we did with the guys from Inspired Bikes. In this interview we discuss a whole host of topics, and we can’t thank the guys enough for taking some time out of their hectic schedule to talk to us.  So sit back and enjoy.

Tell us a little history about Inspired Bikes, and when the brand was created?

The Inspired story began with an idea to introduce a unique 24″ wheel street frame which, would bridge the gap between hardcore street mountain bike and traditional trials riding. Inspired Bicycles was created in 2007 by Dave Cleaver, an enthusiastic and experienced sports engineer and cyclist.

He’d previously been involved with other brands and was one of the founders of Tarty Bikes, the world’s leading online trials specialist store. He had been working on some ideas and projects in his spare time for a while and eventually decided that these ideas were worth pursuing.

So, in 2007, he left Tarty Bikes to set up Inspired Bicycles. He started off with the original ‘Fourplay’ frame and fork and things have grown from there. A chance encounter with the now world-famous Danny MacAskill saw him come on board to test the frames, along with Matt Staples and Alastair Clarkson. 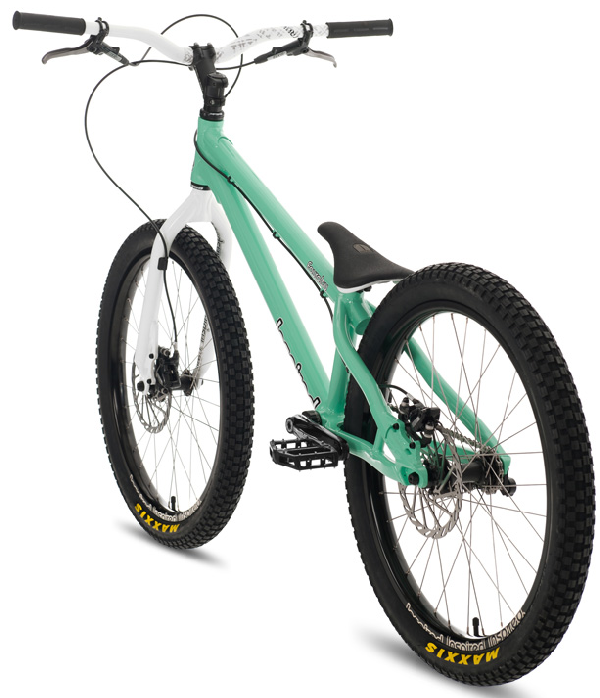 These progressive and dedicated riders were the perfect testers for the frame and development advanced quickly. After some relatively minor alterations and a lot of positive feedback, the frame was ready and Inspired Bicycles was launched.

You have some very impressive street riders in your team, is managing a team of riders of that size difficult?

We’ve got a great team of riders, yeah. They’re all really talented and love to ride! Managing the team isn’t really too difficult – they’re pretty good at keeping in touch and as they all love to ride so much, we never have any difficulty getting them on their bikes! They’re all doing their own things within riding as well; riding demos, putting out videos, travelling the UK and the world and most importantly, having fun on their bikes.

That’s all great exposure and publicity for us and all we can ask of them really! We’ve got some interesting ideas and projects for team activities in the pipeline that we’re pretty excited about, so I guess we’ll see how easy they really are to manage as we start to get them together and organise stuff!

You are incredibly lucky to have YouTube sensation Danny MacAskill on your team, has he been with Inspired from the start?

Yes, we are! He’s the perfect ambassador for Inspired; he’s perhaps the best known street trials rider in the world, he travels all over the planet with his bike and constantly has interesting and exciting projects on the go. He’s also one of the most friendly and down-to-earth guys you’ll ever meet, despite his phenomenal success, and I think you’d be hard pressed to find someone that loves riding his bike as much as him!

He’s been with us pretty much from the start. As I mentioned earlier, Dave met up with him by chance on a riding trip before the ‘Fourplay’ had been officially launched and Danny came on board then. He’d been helping us out with the ‘Fourplay’ for a couple of years before he released his iconic April 2009 video.

His success since then has been phenomenal and we’re really proud to have been a part of that success, and to have benefitted from it as well. Danny’s really enthusiastic about his riding and about his signature bike. We’re also working on some exciting new projects with him and looking forward to continuing to work closely with him in the future. 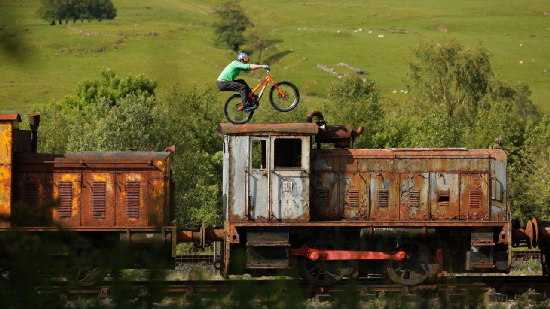 You’ve quickly become one of the most recognisable and sought after brands, but what’s the secret to your success? (Without giving too much away).

I think the fact that we’re all riders of one form or another (trials, street, cross country, DH) has certainly helped. Having a good idea of what riders want, what works, what looks good and, conversely, what doesn’t work. What doesn’t look good, has ensured that we are able to create products that perform exactly as they should, look great and meet riders’ needs and expectations.

Having fantastic riders like Danny, Ali, John and Sean, as well as a whole host of other talented riders, on our team has been a big factor as well – more and more people are moving towards that style of riding, so having them on board is a big help.

Briefly, what does a day at Inspired Bikes HQ involve?

Well, there’s a lot of tea drinking that goes on, I can tell you that, and sometimes we even have cake! On a more serious note, it really depends what we have going on at the time, but there’s usually some product design, graphics work, discussing upcoming projects, new products, a lot of admin, talking to our riders and making sure that we’re both happy. 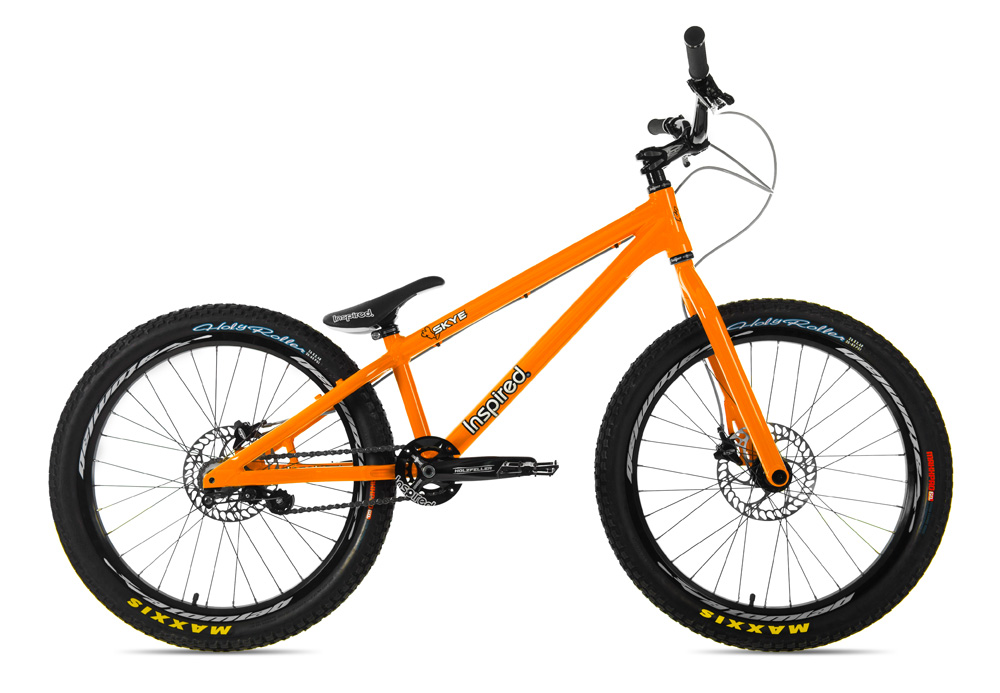 What does 2013 have in store for Inspired Bikes?

Now that really would be telling. We’ve got some exciting projects in the pipeline – some secret and some ‘not so’ secret. There’ll be some new products, some interesting projects and activities with our riders, maybe a move to some new premises. You’ll just have to wait and see!

We’ve seen some sneak pictures of a 20” Inspired ridden by ‘Matty Turner’, are there plans to produce a 20” inspired and make it available to the public?

Haha. That’s one of the ‘not so’ secret projects. We’re currently thinking about producing a 20″ street bike and Matty’s been testing it for us for a while. I can’t really tell you any more than that at this stage though, sorry! 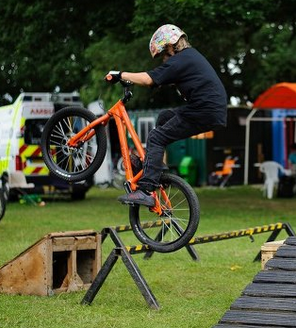 Are you a rider yourself? If you are what is your favourite discipline and what do you ride?

We’re all riders of one form or another, yes. Most of us have been riding bikes for years and, as such, have tried most disciplines. Dave has three or four different bikes, from an Orange Five all mountain rig to a ‘Fourplay’ team. Jon’s the same, he’s got a Five and an Element. Sarah, our graphic designer, has an XC mountain bike and Ben, our marketing manager, has a Hex that he alternates between street and ‘pure’ trials on, as well as a road bike and a cross country bike.

We’re all a bit less active than we used to be now we’ve got so much work to do, but we get out on our bikes quite regularly and still have our fingers on various pulses!

Probably the fact that we’ve been able to offer a product that has allowed a shift in the way that modern street trials is ridden. When the ‘Fourplay’ was first thought of, the idea was to create a bike that was fun to ride and that riders would enjoy riding all the time. We wanted the focus to be on fun and enjoyment rather than results or ‘going big’.

Don’t get me wrong, we love ‘pure’ trials and comps too, but we started riding for fun, for the pure joy of riding. We don’t want people to forget about that side of trials.

It seems that that is the way things are going, at least on the street trials scene, and we’re really pleased and proud to have been even a small part of what influenced that shift. 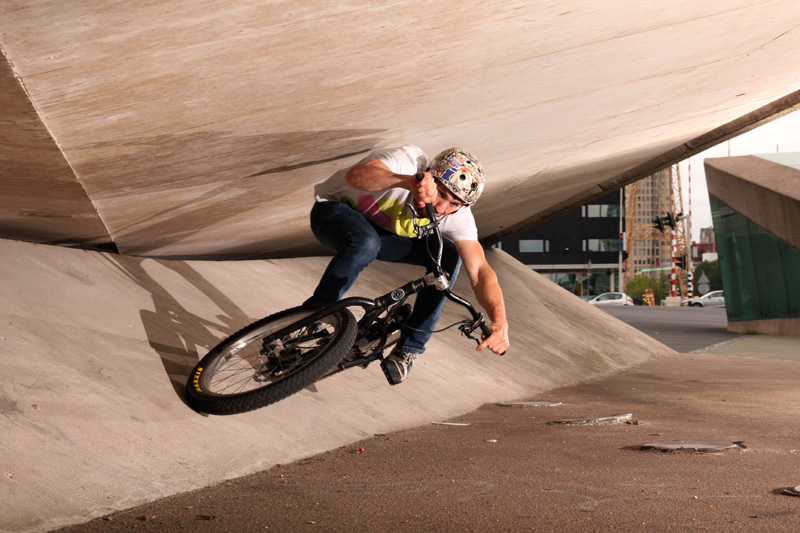 If you could do it all again what would you have done differently?

It may sound like a bit of a cop out, but honestly probably nothing. We’re really happy with the way things have gone and are going. Dave just did what felt like a good idea at the time, and now we’re a bigger and better-established company it seems to have paid off.

Any mistakes that were made along the way, have been learned from and have shaped Inspired as a brand and as a company. Even if we did go back and change anything, we’d probably end up in a similar place to where we are now anyway.

Where do you see the future of street trials being in say 5 years?

I’d say that street trials has a really bright future. With more and more people picking up street bikes, taking their brakes off, being more creative with their riding and having fun on their bikes, it can only get bigger and more exciting.

There are some really creative riders pushing the boundaries of the sport – Danny, Ali Clarkson, Sean Watson, Flipp, to name a few – as well as talented younger riders like Matty Turner and Rob Harris, who are already riding at such a high level and will only get better, who knows where things will end up?

We’re excited to see though, and intend to be there, pushing the product side of things to keep up with the riders! 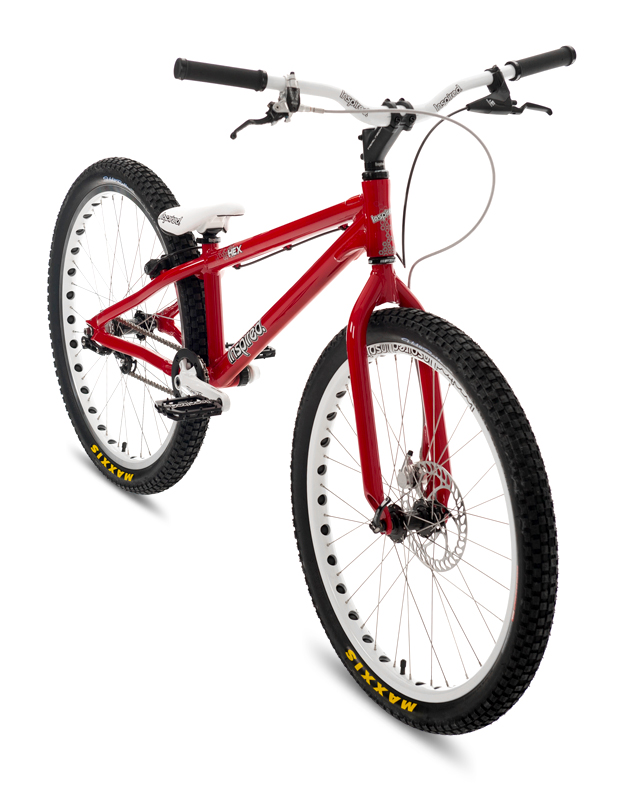 Finally is there anyone you would like to thank?